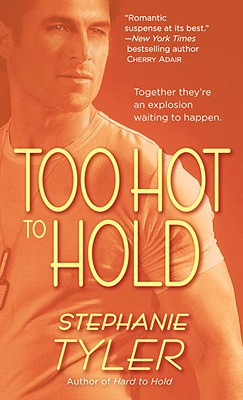 Too Hot to Hold: A Novel

HE'S AN ELITE NAVY SEAL LIVING A RISKY DOUBLE LIFE.
SHE'S THE GORGEOUS REPORTER HOT ON HIS TRAIL.
Nick Devane's life is one big classified secret. Until Kaylee Smith busts his covert world wide open, threatening to blow his cover. Digging around where she doesn't belong could get them both killed...especially when the beautiful journalist uncovers top secret information that could set off a global disaster if it falls into the wrong hands. Nick can't let that happen, even if he has to battle deadly mercenaries and an irresistible attraction that is all consuming....
Kaylee didn't expect her search for her missing ex-husband to lead to this sexy and dangerous warrior. Now she's teamed up with Nick on a mission that takes them into deepest Africa--and into the middle of a massive government cover-up. With rogue agents hot on their trail, Kaylee's going to unearth all Nick's secrets. Before they both vanish without a trace. Before the passion burning between them sets off an explosion "no one "may survive...

Title: Too Hot to Hold: A Novel

Too Hot to Hold: A Novel