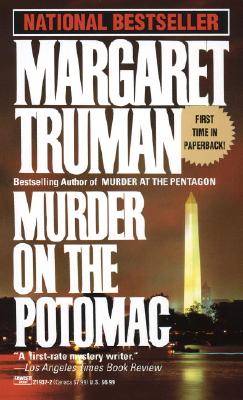 NATIONAL BESTSELLER
MARGARET TRUMAN
Bestselling author of MURDER AT THE PENTAGON
MURDER ON THE POTOMAC
" A first-rate mystery writer."
--Los Angeles Times Book Review
First time in paperback
" Harry's daughter knows her milieu; better still, she knows how to portray it convincingly."
--The San Diego Union
Law professor Mac has unflagging passion for two things in his life: his wife Annabel and the majestic Potomac River. When Mac discovers a weed-shrouded body in the latter, the former gets edgy. Lovely Annabel, owner of a flourishing Georgetown art gallery, must not only endure her husband's obsession with another killing, but she must believe Mac when he says that a stunning female former student is one of the only people who can help him.
They discover that the corpse was once the confidante' of a wealthy Washingtonian, which leads to the Scarlet Sin Society, a theatrical group that--perilously--reenacts historical murders. And soon, the only thing that matters more to Mac than solving this serpentine case is preventing Annabel's untimely death (.
" Truman 'knows the forks' in the nation's capital and how to pitchfork her readers into a web of murder and detection."
--The Christian Science Monitor
" Margaret Truman has settled firmly into a career of writing murder mysteries, all evoking brilliantly the Washington she knows so well."
--The Houston Post